In 2015, the new bicycle parking at Antwerp’s Berchem station opened to the public. Apart from providing a short run to the tracks during the morning commute (less sweat – woohoow), it also allows a new viewpoint on the tracks coming from Antwerp’s Central station. You can see the trains creep out of the tunnel from the lower levels of the Central station.

I had a few days off between Christmas and Newyear, so I decided it was time to check what the spot has to offer from a photographi point of view. Subject of my attempt would be the 13.23 Benelux service from Amsterdam to Brussels. It’s one of the few trains left that jump out from all the white monotony on Belgian rails these days. So, on december 30th my bicycle transported me and my hunting gear to the station. Bad luck, though: right on the moment that the most recent addition to the Benelux Traxx fleet came out of the tunnel from Antwerp-Central, a delayed intercity service from Brussels came into view. Belgian railways and their legendary punctuality…

On december 31st, weather was sunny and I decided to give it another try. No delayed intercity from Brussels to block the view today, great! Alas, the intercity service to Brussels was delayed, thus forcing Infrabel to have the Benelux service arrive at a different platform. I got a nice picture of the delayed intercity. The Benelux service stayed hidden behind the forest of catenary and other poles. 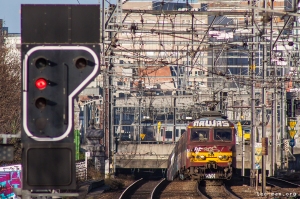 New Year’s eve was a great evening with friends. Even greater was the non-existent hangover on New Year’s day. As fit as a fiddle I decided to give it another try. Third time’s the charm, as they say. Indeed, no delayed trains at the start of the new year, so I got the picture I was aiming for. 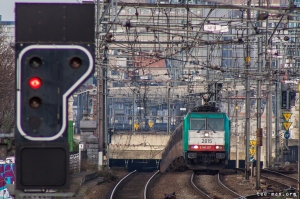 Now I’m wondering if I should return a fourth time for getting the same shot in the sun. We’ll see when that occasion comes up.