Located in the industrial Ruhr area, a lot of rail-related activity goes on in the Duisburg region. The railway network looks like a giant spread-out spaghetti dish – all over the place and seemingly disorganized.

Totally unexperienced in this area, I decided to finally start exploring. It was a  rainy Saturday. Thus my main expectations were moody shots in abandoned as well as non-abandoned industrial settings.

I chose Duisburg as a starting point because of the presence of the busy port, generating traffic hauled by a multitude of smaller and larger private operators. I found the seemingly disorganized network very confusing, despite the number of maps I was carrying with me (google maps on the phone, German road atlas on a decent scale showing also railroads, GPS map). What I also didn’t know is that the whole Ruhr area is an Umwelt zone, requiring a special green sticker on the car’s windshield. Driving around without one means risking an 80€ fine.

All in all it took a while to find my first spot to shoot some photos. ( I must admit that, before arriving in the Ruhr area, I halted in America on the Eindhoven – Venlo line, and in Aldenkerk on the Geldern – Krefeld line). Located on the main line coming from the Netherlands is located a junction between several – abandoned and non-abandoned – railway lines. Standing on one of the abandoned bridges I got to see 6 trains in only 30 minutes… 3 of which were coal trains. 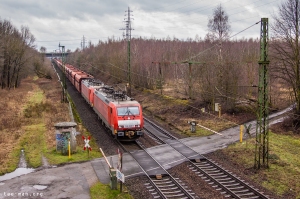 After these photos it was time to move on. A lot of driving around didn’t deliver more good photo opportunities though. Some sightseeing, yes, like the gas-o-meter. I discovered that a lot of the places can be reached on foot, or by bicycle.

In the last light of the day I wanted to find one of the bridges crossing the Rhine river. Turns out it has a foot path as well. It delivers good views on some industrial tracks. The rain had started again though, so after 2 photos I decided to get to a dry spot: my car and a Burger King close to Venlo 🙂 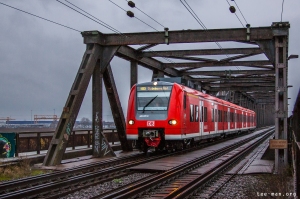 This trip was a discovery. Without much preparation, I got a glimpse of the vastness and density of the area. A few things to keep in mind for next time, or tips for other people who would like to explore this area:

I like to just leave unprepared sometimes and see what the day brings. This day, however, proved that some preparation can be very useful.

3 thoughts on “One day around Duisburg”